Does alcohol burn off during cooking?

It’s a fair assumption that alcohol burns off during cooking when you add it to your recipe. After all, heating in a vacuum is a technique used to remove alcohol from wine and beer to create alcohol-free drinks.

However, the amount of alcohol left in food after cooking depends on a number of factors. The cooking method, cooking time, the amounts of alcohol used and the alcohol content of the wine, beer or spirit will determine the levels of alcohol in the finished dish.

Heat will remove alcohol to a large extent but a bit of alcohol remains even after hours of cooking.

The percent of alcohol-by-volume (ABV) may be minute – it’s unlikely to have a big impact on your blood alcohol level or exceed the drink drive limits – so we might think it doesn’t make a great deal of difference.

An experiment in eating a full dinner menu of booze-laden dishes was reportedly carried out by the editor of New Scientist magazine. It was reported he was over the blood alcohol limit after the meal but what he measured was his breath alcohol immediately after eating each dish which fluctuated throughout the meal. With respect –  it wasn’t very scientific.

But for a person who wants to avoid alcohol in food, or a chef cautious about having booze in the kitchen, it makes sense to use alternatives.

Some foods to be included in the dish may already contain traces of alcohol. Fermented ingredients such as yogurt can naturally contain 0.5 percent alcohol and vinegar has about 0.2% ABV so the percentage of alcohol could be higher than expected.

Alcohol is used in a wide variety of recipes and preparation methods for sauces, marinades, or as a main ingredient as is often the case with deserts, or a flambé where most of the alcohol can remain even after the flame has gone out.

In largely alcohol-based dishes, and those where wine or liquor are added shortly before serving, the remaining alcohol is going to be higher than in baked or simmered dishes were the original alcohol content is low.

According to food scientists David Joachim and Andrew Schloss, in their book The Science of Good Food*, the amount of alcohol added, the amount of heat applied, the cooking and standing time, and the physical dimensions of the cookware matter.

They found that the percent of alcohol burned off in a flambé was 25%, in an unheated marinade left uncovered overnight 30% evaporated, dishes baked or simmered for 1 hour lost 75% and in those cooked for more than two hours 95% evaporated.

It’s worth putting this level of alcohol into context.﻿

According to the Dr Gourmet website there’s less than a half-teaspoon of alcohol in a tablespoon of wine.

A dish that is rapidly cooked may have as much as 50% of the alcohol remaining which means there could be as much as 1/4 teaspoon of alcohol in a serving.

A serving of slow cooked beef bourguignon will have about the same 1/4 teaspoon of alcohol, even though the recipe begins with 2 cups of wine.

Now you know the facts, you can make an informed decision on how you approach your use of alcohol in food.

Next – read How To Cook Without Alcohol.

* This page may contain affiliate links to external sites which means we could earn a small commission on any products you buy after clicking on such links. This does not affect how much you pay for the product and helps us maintain our service. It also does not affect how we write about any particular product and any opinions given are always given fairly based on facts and our genuine opinion, not on the basis of potential affiliate commission. As an Amazon Associate we earn from qualifying purchases. 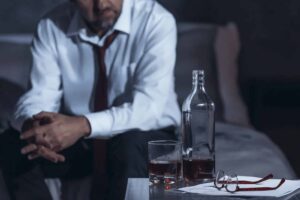 What’s one thing you’re proud of since you’ve been sober?

How long do alcohol-free wines last?